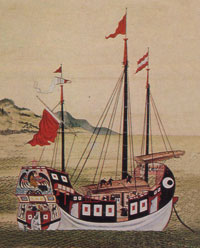 Shipwreck cargos are good indicators of trade items available at the time of the last voyage, although not necessarily including all goods available. Merchants would have selected products appropriate to the route, and on commercial criteria.

The cargo of the seven shipwrecks displayed here shows that Thai and Vietnamese kilns challenged the early Chinese monopoly of ceramic exports from the late 14th century to the mid 16th century. The established indigenous potteries at Sisatchanalai appear to have started production of underglaze black decorated ware under foreign influence. Nearby Sukhothai started producing at around this time, and may have been the first to export such products. The later introduction of celadon at Sisatchanalai seems to have been influenced by a second infusion of know-how.

Sisatchanalai and Sukhothai continued to produce plates and other products for the next two hundred years. Sisatchanalai soon overtook the early export dominance of Sukhothai. Underglaze decorated and celadon plates seem to have been the main product until the mid 16th century. After this, the Sisatchanalai kilns seem to have reverted to underglaze production, although using different clay, forms and motifs. Sukhothai switched from plates to bowls with a new decorative style.

By the late 16th century, the Thai kilns ceased production, except at Singburi. Chinese blue-and-white had become immensely popular in both Southeast Asian and European markets. None of the Southeast Asian kilns could compete. After two hundred years, China again dominated Asia's ceramic trade.

The wrecks have shed light on the technology, money, meals and beauty products of centuries gone by. Please read on!

Following the completion of excavations, research, recording of all artefacts, and reports, Nanhai Marine Archaeology Sdn. Bhd. shares the recoveries with the National Museum, which maintains its share for continued study and display. Nanhai Marine Archaeology is allowed to sell its share to finance further work. It is the policy of the company to donate other artefacts to relevant museums, present the findings from the excavations and research to the widest possible audience, and then to sell the remaining pieces. If interested in owning one of these historical objects, please see the company's website, www.mingwrecks.com, or contact Sten Sjostrand.